Share All sharing options for: Corn Flakes: The Rebound

Sorry about no post game Corn Flakes last week. Life gets in the way, and you didn't really want to read about it anyway.

I'd post the final series number for OSU and NU, but I'm thinking there is a better than even change that they could meet up again, this year. Am I crazy, or just scared?

I wonder if Rock M Nation is going to call a hate week on us again? NU should make sure they send them a postcard from he B10 next year. Don't you- Wish you were here! card.

So big game next week, should be fun. Lets go ahead and start with them.

5. There was going to be a big game in Lincoln next week. Now it's even bigger. With a pair of wins against top-15 teams this week, Nebraska and Missouri's Big 12 North title tilt in Lincoln next week looks enormous. Missouri should easily be in the top 10. Nebraska might be close. This game already had big stakes at a conference level, and now it has plenty of national intrigue. If the Tigers clear the Husker hurdle, it could be relatively smooth sailing for them until the Big 12 title game considering the Huskers already hold a loss and Texas and Oklahoma State are off the schedule.

NU is the only thing standing in the way of Missouri and a possible national title shot. NU has to win; The consequences of a Missouri win would be too much to handle (Not that they wouldn't Pinkel away a game later though). Plus wouldn't that be great? Wreck the MU season, get to make more Mizzery shirts, the ones with the crying Tiger, then head to the B10? I'm all for it. Let's make that happen. 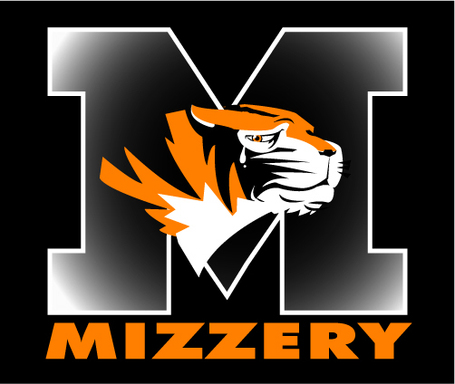 Starting nose guard Dominique Hamilton suffered a broken ankle in the first quarter and is expected to be out the remainder of the regular season, MU coach Gary Pinkel said.

Oklahoma may have been doomed at Missouri, but not by its ranking - Dr. Saturday - NCAAF  - Yahoo! Sports

Unlike Alabama and Ohio State, though, and unlike Oregon next week, Oklahoma's demise hardly came out of the blue. Its Achilles heel has been evident from the beginning. Defense was the issue when the Sooner secondary was flambeed by Utah State on opening night, it remained an issue through the subsequent six weeks and it was finally the death knell tonight in their nascent BCS Championship campaign.

Look NU's defense is specially made to handle a spread attack. Undersized, but fast hybrid safety/linebackers. I think that the D has a great chance to bottle MU up, and Martinez gives NU an explosive attack on offense. Again it's going to be a big game. Fun.

Good luck Kansas State, Baylor, Texas, and Kansas keeping up with the Cowboy attack, and good luck to the rest of the Big 12 North now that Martinez can throw.

Martinez can throw?!? Is that allowed? Oh and yeah good luck rest of the Big 12 South.

Only a B overall? This was the first win over a odd numbered team on the road in forever. I'd appeal.

"I've been in a lot of these types of games," Nebraska head coach Bo Pelini said. "You just have to weather the storm, and eventually you settle down."

Were there half time adjustments made? Or did everyone just settle down? The crossing patterns sure didn't work after the half.

Yes, they'll surely love Paul this week after his career-high nine catches for 131 yards and 100-yard kickoff return for a touchdown in No. 14 Nebraska's 51-41 victory against No. 17 Oklahoma State.

The announcers during the game mentioned that Niles had his "angry face" this week. Can someone piss him off all this week as well?

"He is the master of the art of escape. We had him all but down a lot, but he was able to get away," Oklahoma State defensive end Richetti Jones said. "We were surprised that he threw the ball that well. He did a great job of throwing the ball even though he isn't known for that."

Somewhere Watson is shaking his head saying I freaking told you people, but you never listen.

Taylor Martinez goes to the air in 51-41 win

This was T-Magic's party. Make sure to close the door on the way out, will you? When it was over, Martinez had thrown for 323 yards, run for 112. That's 435 yards for the mathematically challenged -- third-most by a Husker. That's ever. As in, ever.