Share All sharing options for: To Heck With Respect: Texas Sucks! (Encouraging Disrespect, Messing With Texas And Smack Talk Aplenty!)

I've had enough of the respect Texas angle. It was this that finally put me over the edge.

Osborne said in a statement Wednesday that fans need to uphold their reputation for treating opponents well. He said only positive comments are appropriate in comments to the visitors and on signs fans bring.

I'm 100% positive that Texas sucks. You know why I'm so positive about it? Because they have signs that say it themselves, and pictures don't lie. 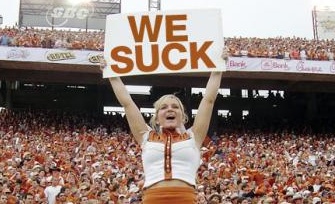 It was bad enough when we had to hear it from Bo. Be nice, be respectful. Whatever. Isn't this the same guy that came unglued after losing to Texas last year and blamed it on some vast BCS conspiracy theory? I like Bo a lot mostly because I understand him. He has emotions and he shows them and I don't mind that one bit.

Apparently the only emotions I'm supposed to show (along with the rest of the peons wearing red) are the appropriate ones. Do you not understand just how smothering that is, especially since this is the last chance Nebraska might ever have to get back at Texas, all the heartaches they've caused, and all the crap they've pulled over the years?

And to be fair (since you're encouraging it) to Texas fans, it's their last shot at us, too. Maybe they want to tell us we suck for leaving the conference, for wearing too much red, or for being a bunch of tractor-driving hicks. Shouldn't they have that chance, too?

When Texas fans arrive at the game, I fully plan on telling them how much they suck and I expect to hear back from them that I, too, suck and I can accept that because some times it's actually fun to tell each other we suck. Then we can all drink more beer, maybe even together if we're adult enough.

What I don't get is why it freaks some people out so much. If I'm really nice and sweet to all the Texas fans, is something important really going to change?

Is the mid-east peace process going to work this time? Will health care will stop being so expensive people can't afford it anymore? Will I get to stop worrying about how my kids are going to afford a college education without going $80,000 in debt only to graduate and NOT get a job because there aren't any? Will the people who run our country start acting like leaders and adults instead of.... oh, screw it. You get the idea.

No. None of that will change. The only possible thing that might happen is someone accusing me of not being classy, when I never declared myself to be classy in the first place, and the reason I'm stuck with that is because of those rotten  "Greatest College Football Fans" signs and some people's insistence on  jamming it down everyone else's throats.

I was there in 1998. I cheered "Heisman" for Ricky Williams because he was that good. I was there in 1980 when me and my fellow Husker fans gave Florida State and Bobby Bowden a standing ovation for beating us in Lincoln. I resent being told I'm supposed to do those things because of some standard, so, please kiss my ass.

Ahhhhh. I feel better. I've sat on that for a long time, like being constipated and suddenly letting it go. Whooooo

I hate Texas. Did I mention they suck?

There are lines in smack talk that reasonable people understand. Hey, maybe they could change those damned signs to "The Most Reasonable Fans in College Football". I could live with that.