Cornflakes: Rising up with the team

Share All sharing options for: Cornflakes: Rising up with the team 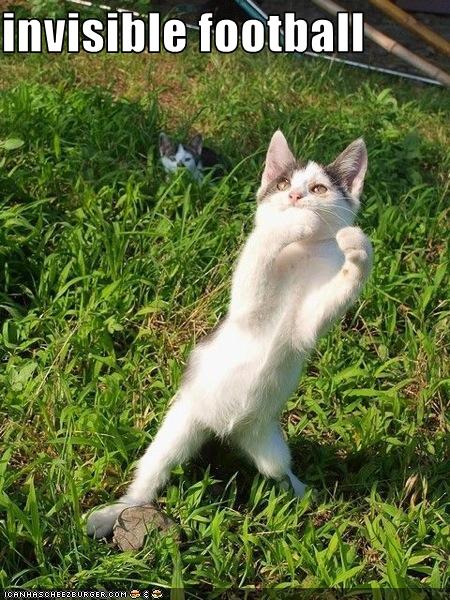 Even the cats are practicing hard.

Pelini says Huskers will 'rise up'
They need to respond well. I think they will, as they have in the past.

Henery Awarded with Big 12 Special Teams Player of the Week
Junior placekicker Alex Henery has earned Nebraska's first conference award of the season as he was named Big 12 Special Teams Player of the Week following his five field-goal performance at Virginia Tech.
I blame him a little for the loss. I'm sure that NU could have gotten 4 points for a field goal, if he called his shot and bounced it off the uprights or something.

Shatel: Bo fans flames evading question
As expected, the e-mails from readers runneth over. Several were critical of Bo Pelini blowing off a question after Saturday's loss at Virginia Tech by saying, "You saw it. It was obvious.'' That's good. Fans don't usually care if the media gets its question answered, but I've always felt that they should. If the coach shuns the question, he is, in effect, shunning the fans. Pelini is an emotional guy after games and he doesn't crave press conferences, but they're part of the job. He's the CEO and voice of the program. People have the right to want the head coach to answer to what happened in a game and explain his and the team's actions, good or bad. Besides, Bo, never assume that anything is obvious to the media.
You know - I agree with Tom Shatel here. Pelini should be answering questions and not be such an ass about it. OTOH, maybe it's better if we just make stuff up. Like that Zac Lee Broken Hand thing. - CB