It's that time of year again - with 30 days left before the start of the regular season, it's time to get ready for the 2009 season! In that spirit, it's time to announce the 2009 CN College Football Pick 'Em!  We'll be picking games that include Nebraska, of course, as well as other Big-12 teams. We'll throw in some of the best other games of the week as well.

To participate, just join our pool. It's free to play, and FunOfficePools.com is spam-free as well. The pool is open now to join, and first picks are due by August 28th - so sign up now. The pool will run the whole regular season, concluding on December 6th with, among other games, the conference championship games. Let's get as many of you signed up as we can, and find out who is the best at picking winners.

For the first couple of weeks, we'll be giving away free copies of Cornhusker Kickoff 2009, the must-have Husker football yearbook!  The grand prize winner will receive a copy of the 1995 National Championship Season DVD Box Set from our affiliate Best of Big Red! 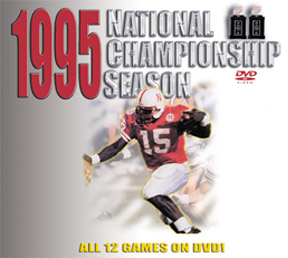 So please join us - more information about the pool after the jump......

To accumulate the most points throughout the regular college football season by correctly predicting the winners of a set of football games. Doing so will win you the grand prize - the 1995 National Championship Season DVD Box Set.

We will be giving away prizes to weekly winners as we have prizes available. The first couple of weeks we'll give away a copy of Cornhusker Kickoff 2009 to the top two winners each week. After that, I can't promise anything, as I'm still looking for sponsors, but we should be able to come up with something - we did last year!

Teams Used For The Pool

The pool commissioner (that's me!) selects which teams your pool will use when he sets up the pool (the Season Pass). The commissioner can also pick individual games each week. Game selections should be finalized by Sunday at midnight before the week's upcoming games.

Each week you need to pick the winner of each game (either straight up or vs. the spread - depending upon your pool). If your pool is a weighted pool, you also need to apply confidence points - the higher the confidence you have in being right, the more points you should assign to the game. If your pool has 10 games, the games will be worth between 1 and 10 points. If you are not using the weighted option, all games are worth 1 point each. You score the points for the game if you correctly pick the winner.

When Are Picks Due

Picks are due before the games start - and all picks are locked at noon on Saturday. So if you have a Thursday night game, you must make your pick on that game before it kicks off. However, you will still be able to change your other picks after that game up until the other games start or noon Saturday, whichever occurs first.