Share All sharing options for: Cornflakes thinks the forward pass IS cheating!

Summer is moving fast, and the buildup to college football is starting. It's almost Aug sports fans!

Plenty of fun facts at Bobby Bowden's roast, including TO!

Esteemed colleague Stewart Mandel has made a grievous error. Last week, Mandel omitted former Nebraska coach Tom Osborne from his list of college football's five most legendary coaches of all-time  because Osborne, according to Mandel, was "too bland." Stew should have come to Florida State's University Center Club on Wednesday, because Osborne absolutely slayed at a roast for FSU coach Bobby Bowden.

Of course, Bowden gave as good as he got Wednesday. Turning to Osborne, Bowden recalled a conversation with an official that may or may not have happened during a Fiesta Bowl against the Cornhuskers. Bowden said the official came to the sideline to inform Bowden that Osborne, on the other sideline, had been complaining all game that the Seminoles were cheating. "Tom," Bowden said, "it's just called the forward pass."

While waiting for the season you can check out the 2009 CFN Nebraska Preview it's a solid breakdown.

Have you heard about the Kiffin at Nebraska?
Tim Griffin lists his favorite stadiums in the B12.

2. Memorial Stadium, Nebraska: Walking into the stadium for a big game still gives me goose bumps. They did a nice job of renovating the press box into one of the very best in college football. And it still gets me when I'm down on the field after a game and see Nebraska fans providing a standing ovation for the visiting team as they leave the field. You don't see that very often.

So what's your favorite stadium? 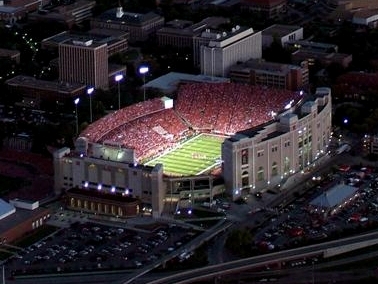 Does it get any better than this in the B12? Anywhere?

Berry Tramel Doesn't Understand Offensive Line Play - I Am The 12th Man
Berry Tramel's article on the de-valuation of offensive linemen due to the spread offense just shows he doesn't understand OL play. Did everyone see the Berry Tramel article? You did? You thought it was as dumb as I did? Good, we're on the same page. Beergut gives you a better explanation than I could.

In The Bleachers Podcast - Peter Bean from BON Talks Big XII Football
Don't know if you've been following them of late, but the ITB guys are doing pretty well in the podcasting department. Over the summer they've had as guests Bruce Feldman, Phil Steele, the Heisman Pundit, the Wiz of Odds, and now Peter Bean from BON. Give 'em a listen...

Steve Warren to be inducted into Nebraska football hall of fame
Steve Warren has been elected to the Nebraska Football Hall of Fame, according to a press release.Warren, who played defensive line for Nebraska from 1996-99, will join Dennis Carlson, an offensive tackle from 1964-65; Kenny Brown, a wingback from 1975-79; Dana Brinson, a wingback from 1985-88; and Kelly Saalfield, a center from 1977-79.

Frank Solich is probably the most underrated football coach in the history of college football. He was light years ahead of his time in running the ball from the shotgun. I know I borrowed many ideas from Frank that we use in our Triple Gun Offense. His offense at Nebraska combined elements from many styles of offense that he married together into a diverse offense that could attack a defense many ways. He was also an outstanding play caller with a knack of dialing up the right play at the right time.