Share All sharing options for: 2009 Nebraska Spring Game - Whoa! Who's THAT Guy?

I'm off to the Nebraska spring game in a few minutes, after driving all the way down from Minnesota last night. Wasn't a bad drive, although my ipod died (for good, which is different than the other times where it's died and been resurrected), which made it a little frustrating. The thought of Husker football and being around a whole gob of people who feel the same way I do made the drive enjoyable. That's the biggest reason to attend the spring game for me - other Husker fans gathering and having fun.

I look forward to seeing the 2009 Huskers in action. I'm busy putting together next season's "A Sea of Red", which includes unit previews, so the spring game gives me the chance to see the guys in action and confirm what I'm already thinking.

Obviously there's the quarterback and wide receiver positions, but I'm not sure if a scrimmage will answer any real questions about those units. One question has already been answered, that being it won't be looking like last year's Spring Revival - there's too many clouds in the sky. 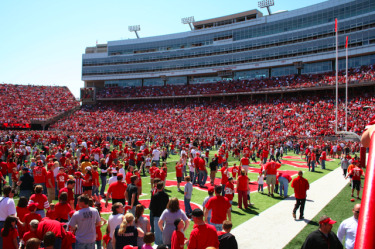 The beauty of a scrimmage is that it will bring more questions than answers. I'm hoping the biggest question that comes out of this is "Whoa! Who's THAT guy?".