Biggest disappointment (in general): Nebraska. You know the formula: Hot-young coach takes over at tradition-rich program and puts together a monster class in his first full recruiting year. In fact, it happened the last time the Huskers changed coaches -- Bill Callahan landed a top five class in 2005.

However, that wasn't quite the case for Bo Pelini, whose first full class was solid (top 30) but hardly spectacular. The lone "star" is QB Cody Green (Dayton, Texas) -- and even he was ranked just 173rd by Rivals.

When I first saw this my response was - "Oh, how quaint that the guy who once called Bill Callahan one of the five worst coaches now uses him as a hallmark of success."

Then I thought, like most Husker fans, that the high falootin’ 2005 class turned out to be largely a bust. Clearly Mandel doesn’t remember this, or he’s purposefully hoping we forgot, and we’ll send him tons of mail that he can use in a future column.

But if you take a minute and step back, you have to realize that this year’s class probably does look like a big disappointment. In order to understand that point of view, perhaps you need to step back with me.

Pelini took over a floundering Nebraska program and put together a good season in his first full year as  head coach. He endured a three-game losing streak during which he sometimes looked like a madman, screaming at his players and assistant coaches. He pulled his team together, realized the man he wants to be on the sideline, and won six out of seven games to finish the season.

Any way you look at it, it’s been a pretty impressive year for Bo Pelini and Nebraska football. 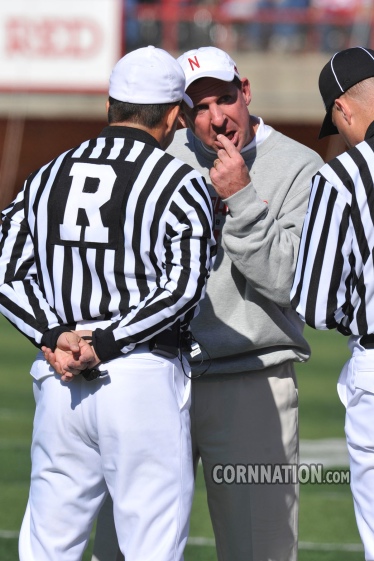 To make it even more impressive, Pelini would have had to put together a top ten recruiting class, filled with stars and high rankings, but he didn’t, and therefore it is disappointing. If he’d have had a mediocre season, there wouldn’t be such high expectations.  Taken from that perspective, Mandel is delivering Nebraska a compliment, isn’t he?

We have, in Mandel’s words, a "solid" recruiting class. This class represents the building blocks that are required to continue to build upon the success of 2008.  It’s not important that we win a national title next season. What’s important is we take back the Big 12 North. After that, it’ll be important that we hold onto it, then after that we win the Big 12. Along with a Big 12 title will come shots at a national title.

It’s important that Pelini keep moving forward, keep his momentum going. That is what will keep Pelini around and Nebraska on a path to success. Mandel’s world is full of one of coaches who are fired for having set such high expectations (such as Callahan) and failing to meet them.

Besides, Mandel had to pick someone. Given Pelini’s success this season, who else was he to pick?