Corn Flakes: Moving to the Post-Season

Share All sharing options for: Corn Flakes: Moving to the Post-Season

As we move into the off-season the big question will be the offense. Here's a quote to think about-

"Very few really seek knowledge in this world. Mortal of immortal, few really ask. On the contrary, they try to wring from the unknown the answers they have already shaped in their own minds - justification, explanations, forms of consolation without which they can't go on." - Ann Rice, The Vampire Lestat

So I guess try to put aside your preconceived ideas about the offense. Too many fans don't like Watson because Callahan hired him, and just as many don't like Cotton because he represents the old guard. So keep an open mind, and try  to understand where the struggles are coming from.  Mike thinks it's from a lack of talent, some think it's play-calling, others blame the O-Line. It's probably a combination of all that and more.

If that's too deep for you here's some cats. 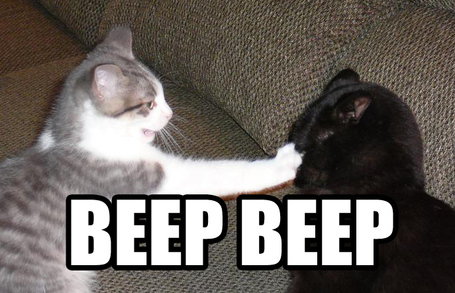 Bo is on the verge of something big at Nebraska, but he must not allow those offensive trends to continue. He must not allow a season like this to happen again. He must take control of this entire football team — not just the defense. He must build the offense in his vision. He must start over. No quick fixes.

Chatelain thoughts on the offense. Gee I wonder if he likes Watson.

Scout.com: 5 Thoughts - The Most Outstanding Player ...

The most outstanding college football player in the United States for 2009 is Ndamukong Suh, defensive tackle, Nebraska.

Hmmmm you'd think they would have an award for that...

2. Nebraska: It was amazing that the Cornhuskers were so close to the Big 12 title, considering all of their struggles on offense. But even after producing five first downs and 106 total yards against Texas, the Cornhuskers were close because of the play of their defense, particularly Suh. Some of the comments that the Pelini brothers made after the game that were reported in the Omaha World-Herald will only increase the intensity of next season’s game when Texas visits Nebraska. But after Saturday night, there’s no doubt that Bo Pelini has pushed the Cornhuskers program ahead faster than most expected. And the Holiday Bowl will be another way for the Cornhuskers to continue their growth.

Officials think they called it right

Well as long as they think that, it's ok.

Scout.com: 34 Things You Need To Know About The Bowls

24) Rematch Alley, Part II. Arizona and Nebraska met in the 1998 Holiday Bowl, claimed by the Cats in a 23-20 thriller. That game marked one of the two transcendent moments in Arizona football history, the other being a 29-0 whitewash of Miami in the 1994 Fiesta Bowl

"It was just miscommunication,'' Anderson said. "That's the way it was all night. The chemistry of the team, I don't know. Everybody was on a different page. Everybody was trying to do their own thing, and it wasn't working.