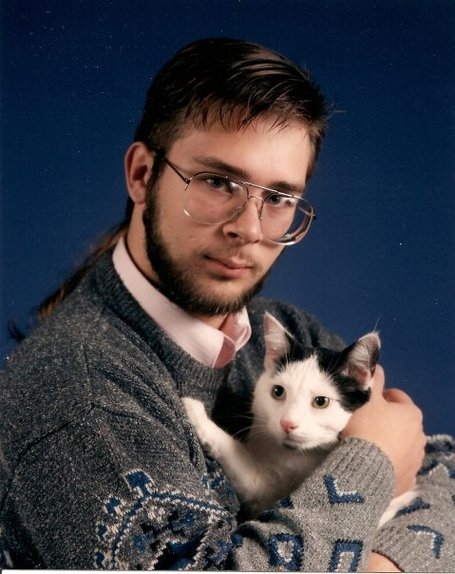 We'll be watching the game, together!

Texas was supposed to blast Nebraska and waltz into the BCS title game, but Suh refused to let the Longhorns ascend so easily. Facing double teams and getting held on almost every play, Suh singlehandedly dismantled one of the nation's best offenses. He finished with 12 tackles (seven for loss) and 4.5 sacks in what would have been an all-time upset had officials not used video replay to discover that one second remained on the clock after Texas quarterback Colt McCoy's final throw hit a stadium railing. The Longhorns kicked a field goal as time expired and won 13-12.

"I can't remember evaluating a defensive tackle with the kind of instincts that you see out of Suh — the interceptions, the forced fumbles, the fumble recoveries," McShay said. "(He's) always around the ball. He's flat-out dominant. There's not a lot of players like him."

What does NU want for Christmas?

Nebraska ... One fewer second and three more feet to the left.

So I guess you can't be fined for second hand, over-heard conversations.-JLew

Kelsey Griffin (Nebraska) and Brittney Griner (Baylor) were named Phillips 66 Big 12 Women's Basketball Players of the Week by a media voting panel for games from Dec. 14-20. Griffin (player) earned her sixth career award while Griner (freshman) was recognized for the third time this season.

Nebraska starts at 48th in the college baseball preseason poll from Collegiate Baseball. Considering the season we had last year, that's not actually half bad. - JJ

Starting running back and leading rusher Joe McKnight did not travel with the Trojans to the Bay Area for Saturday's Emerald Bowl against Boston College, while tight end Anthony McCoy, offensive tackle Tyron Smith and defensive tackle Averell Spicer have been ruled academically ineligible, the school announced.

Given that USC is already being investigated for Reggie Bush (better known as the song that never ends), and O.J. Mayo, you can insert the joke here about how USC violated NCAA rules, so the NCAA will have to come down hard on someone like South Dakota State to make up for lacking in their ability to enforce anything meaningful. - JJ

I'm including this because it's of interest to me as a guy who follows college baseball quite heavily. ASU is a huge baseball program, or at least they were until this has come to pass. This could destroy their program, and given the nature of the accusations, and the repeated problems, maybe it should. Hey, at least they're in the same conference as USC. The NCAA could whack them really hard, and it would be like hitting the Trojans (you have to think like a bureaucrat to understand that mentality. If it doesn't make sense, congratulations, you're not a bureaucrat.) - JJ

Part I: Why the Big 12 Needs to Do Everything It Can to Keep Missouri

Part II: Why the Big 12 Needs to do Everything It Can to Keep Missouri

Part II exploring the possible effect of Big 10 expansion on the Big 12. Herein, we discuss Notre Dame, how to keep Missouri, whether the Big 10 has ulterior motives, Missouri's ties to the conference, and how it all could affect K-State.