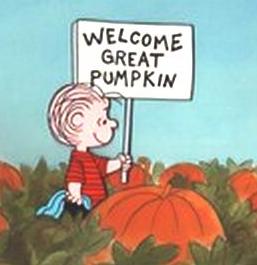 If Linus goes to the KU @ Texas Tech game he may finally see the great pumpkin! Or will the great pumpkin show up in Waco and give the gift of offense to the Huskers? Wait, crap you can't ask the Great Pumpkin for things, or else he won't show. Forget I brought it up.

Pretty boring week last week. Husker Mike, Corn Blight and myself tied, we all lost the ATM and ISU upset games, and didn't see a Texas cover over Missouri, though we should have.

More excitement after the jump. Wait until you see Corn Blight's picks....

Corn Blight: Halloween..... college game day on Halloween. That can mean only one thing – it's time to start thinking bring out the "what mascot would win this game" method of picking games. Sad thing is – it's probably as reliable of method as there is in picking Big 12 games this season.

Mike:  Either Vegas thinks that Missouri is ready to go el-foldo, or Dan Hawkins finally learned his lesson.  Yeah, right.  The Buffs are the perfect antidote for a Missouri team reeling from three losses and a gimpy Blaine Gabberts. Tiggers 31, Buffies 17

JLew: What is up with this spread? I know that CU beat KU at home, but there is a good to great chance that KU is pretty bad. (Don't get all upset Jayhawk fans we all suck here in the North) Tigers 35 CU 17

Corn Blight: Mascot methodology says "Could a Tiger beat a Buffalo?". Buffaloes are huge animals, I mean, you could probably store a 16 gallon keg in their head. But Tigers.... who wants to wrangle with a Tiger. Big claws and big gnashy teeth! Then there' the agility! Tigers 28 Bufaloes 14

Mike:  The 'Cats have ridden a missed extra point by Iowa State and the suckage of Mike Sherman and Dan Hawkins to the top of the Big XII North.  Cinderella, the clock just struck twelve. Yes, Brian Cook...the Sooners are still one of the top ten teams in the country.  Sooners 45, Wildcats 7

JLew: K-State will not win another game. Yes NU will beat them in Lincoln (I hope). I'm tired of people telling me that "IF K-State can keep it close..." Reality sets in this weekend. Quit watching the highlights from the B12 Championship game while you're at it. That stupid song gets stuck in my head. OU 42 KSU 13

Corn Blight: Wildcats – sounds ferocious doesn't it? Only at first glance. Then you realize that Wildcats aren't that big, i.e. Lynx, Bobcats. Sooners – covered wagons, sounds pretty innocuous until you think about the fact that everyone who road in one of those things carried a lever-action Winchester. Wildcats, no chance. Lever-Action Sooners 38, Wildcats 3

Mike:  The wacky factor infecting college football this season seems to demand that the Cowboys win this game.  But I'm not going there.  Texas 31, Oklahoma State 17

JLew: I'll go there. Texas gets knocked down. Their BCS dreams may be ruined. Everyone not wearing Burnt Orange giggles. Texas 27 OSU 28

Corn Blight: Ack! Cowboys vs Longhorns? It's all fine until there's a StamPEDE! Then those Cowboys get trampled, squished and gored which is worse than being folded and mutilated but not by much. Not pretty. Longhorns 34, Cowboys 23

Mike: I don't know to explain last weekend.  Iowa State recovers eight Husker turnovers, and the Aggies get their revenge on Mike Leach.  So scratch last weekend, and what have we got.  An ISU team that could have/should have won the previous two weeks.  An A&M squad that got blown out by Kansas State.  If it weren't for the injury to Austen Arnaud, this one would be easy.  Still taking the Cyclones, though.  Clones 21, Aggies 17

JLew: Can you have a double let-down game? ISU loses, I don't know why, maybe because I'm still upset with last week'd debacle. ISU 21 ATM 30

Corn Blight: Cyclones destroy everything. I'm not even sure what Aggies have to fight with. Dirt cellars, maybe, as a defense. Dirt cellars can't score for beans. Clones 24, Aggies 14

JLew: I don't like KU on the road with their pass defense. I also heard that the the players all broke up with their fat little girlfriends, despite the fact that they need lovin too. Texas Tech 47 KU 28

Mike:  The Bears have struggled since losing Robert Griffin.  The Huskers have struggled on offense the entire month of October, sans one quarter against Missouri.  If Nebraska can't get the offense untracked this week, they may not ever.  Huskers 24, Bears 3

JLew: Anyone wonder what Husker Nation would be like after an NU loss to Baylor? No me neither. Huskers 30 Baylor 9

Corn Blight: Cornhuskers vs Bears. Sounds ominous doesn't it, but all the Cornhuskers I know drive John Deere combines. You know what you get when you cross a bear and a cornhead? Ground bear meat! Nebraska 28, Bears 3