ISU fans are living it up, as they should be. Still puts me in a bad mood though. This is all over the internet- 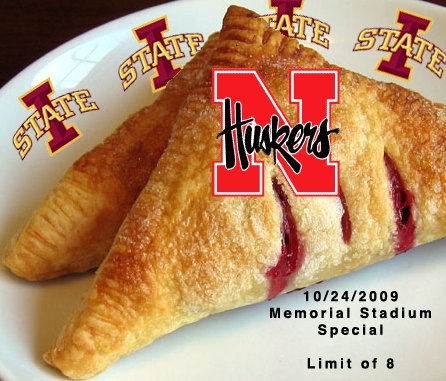 Reorientation: The Big 12 North has left the building
The Big 12 North - let's not kid ourselves - is horrible. Amazing that this half the conference is this bad after only one year. - CB

HuskerExtra.com - Another receiver commits to NU
Quincy Enunwa, a 6-foot, 200-pounder from Moreno Valley, Calif., becomes the 11th recruit in the 2010 class.
Doubleextrapoint has the info.

Monday notebook: Pelini sends message on Monday
Another noticeable change on Monday during practice came at the wide receiver position. Both senior Menelik Holt and sophomore Curenski Gilleylen were no longer with the top offensive units.
Maybe we'll see more of Antonio Bell and Brandon Kinnie. It amazes me that the coaches are willing to move receivers around, but not let Cody Green get a least one series. I guess Green really must not be ready. What else do you take from it? - CB

Omaha.com -: Sports - Shatel: Nebraska should come clean with statuses of Helu and Green
Shatel makes a few demands of the program.

Omaha.com - Pelini challenges offense to step up
"It's about stepping up and making a play," Pelini said Monday night. "You need somebody to step up and go to the forefront, take the challenge and make a play."
Will the team respond? Can they respond?

HuskerExtra.com - Paul trying to look forward
Well I should hope so. How about making some plays and not dropping balls to start with?

Suspension Watch: ESPN puts Griese on ice for 'taco' remark - Dr. Saturday - NCAAF - Yahoo! Sports
I find this ridiculous. You can watch the video at the link.