Rumors all over the Big Red internet that the Blackshirts were handed out yesterday at the end of practice. No official word that I can find though.

Supposedly Suh will have a feature on ESPN College Gameday. So tune in for that if you can handle watching that show for long enough

I'm back in Nebraska to help with harvest, so I won't be on the game post and I'll get to listen the radio call. 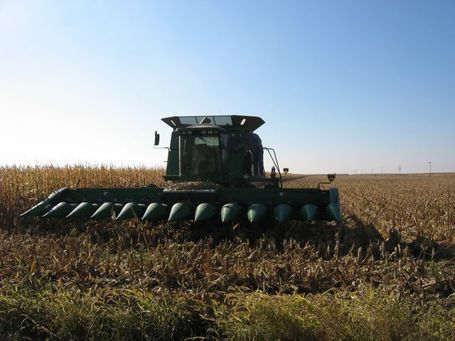 Picking Corn and listening to the Cornhuskers!

HuskerExtra.com - Husker defense excels at quick change
No points allowed after a turnover

HuskerExtra.com - Sizing up the storylines: Nebraska vs. Texas Tech
The LJS breaks down the stories surrounding the game, how will Nebraska handle the positive media? Can Watson answer his critics? Who takes the ball after Helu?

Big 12 mailbag: Don't expect UT's Whaley to play - Big 12 - ESPN
Steve Strom of Lubbock, Texas, writes: What do you think about Texas Tech’s chances Saturday in Nebraska? Is there any way we can steal a win from a Nebraska team that might be a little flat after beating Missouri last week?

Tim Griffin: Steve, I don’t think so. I really like Nebraska’s defensive line keyed by Ndamukong Suh to put pressure on whomever Tech has playing quarterback. Mike Leach has been successful in recent seasons against the Cornhuskers and has even won in Lincoln before. But this is a different Nebraska team coached by Bo Pelini than in previous seasons. Because of that, I'm thinking it will be tough for the Red Raiders to win tomorrow in Lincoln.

This is interesting as well-
I would also hope we would see Cody Green being used in the next week or two. The Cornhuskers have had some time to work on a package with their talented freshman quarterback. I’m just saying that bringing him into the game for a couple of series could change the momentum and make Nebraska that much more difficult to beat with a shot of offensive diversity that's missing right now. And with the questions about their running backs, developing another running threat could be huge for them.