Some nasty rumors out there about Rex Burkhead. I have not been able to confirm anything yet. Cue Blight to write another rumors post. Also anyone catch Monday Night Football mention the Callahan is a great teacher of the game? I'm not touching that with a ten foot pole. Anyway on to the cats and the links. 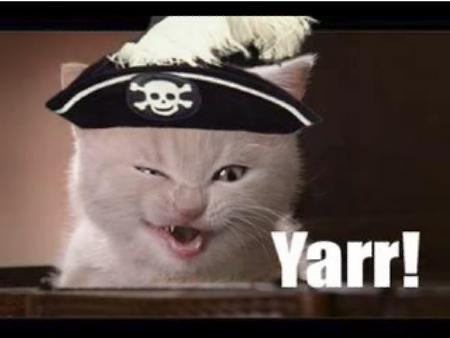 The cats think Leach be a wily one at that.

NE StatePaper.com - Leach: Starting QB 'Gametime Decision'
Sheffield, a walk-on, earned his nickname "the day he walked in the door," Leach said, because of his slight frame. Sheffield is 6-foot-4, 175 pounds. Think of former NU quarterback Beau Davis – only skinnier.
Wow I'm 175 pound and only 5'11", and I'm pretty skinny. Suh may just break that guy in half. -JL

Life in the Red's Blog | Leach's 'big-time' decision
Mike Leach says it'll be a game-time decision as to who will quarterback his team Saturday, but the smart money is on junior Steven Sheffield over classmate Taylor Potts. Leach has a Leach-like take on the matter. "I've been criticized for not doing what 'big-time' programs do, so I've decided to accommodate the wishes of the media," the Texas Tech coach said Monday. "And 'big-time' programs like to have game-time decisions, so we've got us a game-time decision on our hands, and I think that'll be not just 'big-time' for everyone but exciting for everyone. So there's 'big-time' for you. "How do you like that?"
I think he's ripping on Florida here.

Omaha.com - The Omaha World-Herald: Big Red Today - On a mission to maintain the edge
Not this team, though, Pelini said. The second-year coach said he’s intent on making sure the Huskers "keep the same approach" and continue to play with the edge that helped them earn a comeback win over the Tigers. "We better have an edge," Pelini said. "We’ve got a hell of a football team coming in here. They’re playing well. We’ve got our work cut out for us."
NU can't have a letdown, anyone worried?

Nebraska Bloggers are ranking the Big Red High
Nebraska in the Top 10? I decided this on Saturday night after I returned home from the game and witnessed the carnage in the Top 25. I keep hearing today how if Nebraska had beaten VT they'd be in the top ten. Why not put them there, then? Nobody who watched it came away thinking NU and VT were anything less than equal. The huge jump has nothing to do with the game against Louisiana and a lot to do with the way Tech handled Miami, but here's the other factor: Nebraska hasn't played poorly yet. That's something Oklahoma, USC, Oregon, Cal, Iowa, BYU, LSU, or Oklahoma State--all teams ranked ahead of the Huskers in either the coaches or AP poll--can't say and consistency has to count for something. The Huskers haven't faced a truly explosive offense yet, but they'll see plenty of them in the Big 12.
This is from last week. It'll be interesting to see whether other bloggers start moving Nebraska up, or we (Nebraska bloggers) stand alone. - CB

Teel time - dailypress.com
Prior to his team's game against Nebraska last month, Virginia Tech football coach Frank Beamer pronounced the Cornhuskers' program "back." We immediately teased Beamer for inflating an opponent that is enduring comparatively lean times after a remarkable run of 33 consecutive seasons (1969-2001) with at least nine victories. And while it's impossible to judge how close 21st-ranked Nebraska may be to regaining national prominence, it's fair to say Beamer may have been onto something.
Ok opposing coaches can say NU is back, no one else is allowed to though. -JL

Nebraska/Texas Tech Line Now At 10; Big 12 Lines doubleextrapoint.com
That's a lot of action to more the spread that much, that fast.

Life in the Red's Blog | Suh pub picks up
ESPN gameday feature and an SI article are in the works.

Suh Gets Another Award - Lott Trophy Recognition
Nebraska Defensive Tackle Ndamukong Suh has been named the Lott Trophy IMPACT Player of the Week.