Corn Flakes: Is It a Trap?

Share All sharing options for: Corn Flakes: Is It a Trap?

The cats will be stopping by this week. The first thing they have to say is that NU needs to be careful with Texas Tech. 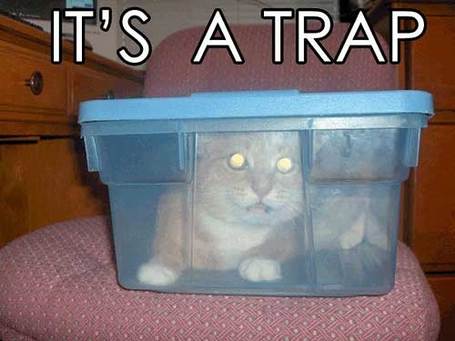 Now usually trap games are when a team gets caught looking ahead to another game. Baylor this year is (was) a classic trap game, on the road right before OU, less so now with Baylor losing their QB. Now I think Texas Tech maybe a trap game if NU starts feeling too good about the MU win. The coaches can't let that happen. Anyway the cats say they will be around all week. On to the links!

HuskerExtra.com - Pelini: "No issues" with Helu after win
"He’ll be back practicing (Monday)."'
I'll feel better once we see his out there. No offense to the coach, but he's been known to withhold injury information before. After a dominating performance by the Husker defense, will there be Blackshirts at practice this week? "I haven’t thought about it much," Pelini said. "Not yet."
Give them the shirts coach!, um, please?

Defense separates Florida and Alabama from the pretenders - Stewart Mandel - SI.com
Fiesta: Nebraska vs. Boise State Toward the end of the Nebraska-Missouri game I regrettably tweeted that Kansas remained my pick to win the Big 12 North. In the words of Gob Bluth: "I've made a huge mistake." The Huskers have a far more favorable remaining schedule -- and a much, much better defense. Even if they lost in the Big 12 title game, their famous traveling horde would be widely welcomed by any bowl committee.

Was Herm calling Huskers' plays? | CJOnline.com
Not sure the better team won that game, but it was a huge win for Nebraska considering the Cornhuskers play both their primary North competitors, Kansas and Missouri, on the road. That means, of course, it also was a huge win for Kansas, which plays Nebraska at home and Missouri at a neutral site.
Blather, blather, blather...... - CB

HuskerExtra.com - Lincoln, Nebraska - Football
Funny, but it seems like only yesterday I was receiving e-mails from Nebraska fans expressing deep concern that Shawn Watson might eventually become a candidate for Colorado’s head coaching job. "Please tell me he wouldn’t go," some wrote. Watson-related e-mails suddenly take on a different tone . .

Massey Ratings
Nebraska is currently ranked fifth in the Massey Ratings, right behind Texas who is right behind Virginia Tech. They are also 5th at collegefootballnews.com
5. Nebraska 4-1 Last Week: W, at Missouri 27-12 This Week: Texas Tech Why the ranking is too high: The offense took a while to show up against Missouri. So far, that's the only win of note, and while it's a good one, for about three quarters this looked like a team that didn't belong anywhere near the top ten. There's still more to prove, but that chance likely won't come until the Oklahoma game on November 7th. Why the ranking is too low: The Husker defense has become special. It was special to start the season, but after what Ndamukong Suh and the D did to Missouri, now it looks Big 12 title good. If the Big 12's No. 1 pass defense stops Texas Tech next week, then the Huskers might be a lock for the Big 12 Championship. Would a 12-1 champion have a shot at Pasadena? It's not too early to think big for a team with a D this good.

Big 12 power rankings: Surging Cornhuskers move to No. 2 in poll - Big 12 - ESPN
2. Nebraska: The Cornhuskers’ defense played at a dominating level against Missouri as it gradually wore down the Tigers before their 27-12 triumph. Ndamukong Suh had a huge game to key a brutal pass rush that won the game for the Cornhuskers. Zac Lee was streaky, but still came up big during a stretch of 3 minutes, 32 seconds early in the fourth quarter when the Cornhuskers took the lead against the fading Tigers. It won’t get any easier for Nebraska this week as Texas Tech’s explosive offense comes to Lincoln. The Cornhuskers rank second nationally in scoring defense, third in pass efficiency defense, 14th in pass defense and 15th in turnover margin. But Tech has won the last three games of the series, scoring 70, 37 and 34 points against Nebraska.

Scout.com: Who's Hot (Oct. 11) Quizz, UF pass D ...
2. The Blackshirts Bo Pelini has withheld the fabled Blackshirt jerseys until he feels his Huskers have earned them. The coach might be forced to give in real soon. Nebraska is No. 2 nationally in scoring defense, failing to yield more than 16 points in any one game. The pass defense has been air-tight, aided by the relentless push up front from linemen Ndamukong Suh, Barry Turner, Jared Crick, and Pierre Allen.