Share All sharing options for: Gator Bowl: Nebraska vs Clemson - It's Official

It's official, the Nebraska Cornhuskers will play the Clemson Tigers in the Gator Bowl on January 1, 2009 at noon CST. This will be Clemson's ninth Gator Bowl, more than any other team. Nebraska has never been to the Gator Bowl.

Clemson comes into the game with a 7-5 record, winning four of their last five. They started the season being destroyed by Alabama, a disappointing start to the season since they were ranked in the top ten and expected to win the ACC. Instead, they finished 4-4 and third behind Boston College and Florida State in the Atlantic division.

The season was bad enough that Tommy Bowden resigned mid-season after losing to Wake Forest and dropping the Tigers to 3-3. Assistant head coach Dabo Swinney was named interim head coach on October 13th. Swinney fired offensive coordinator Rod Spence and took over offensive playcalling. Clemson lost to Georgia Tech 21-17 the following week, beat Boston College 27-21, lost to Florida State 41-27, and then won their next three games; 31-7 over Duke, 13-3 over Virginia, and 31-14 over hated rival South Carolina.

On December 1st, Swinney was named head coach, after which he promptly fired (or had him resign, pick your semantics) defensive coordinator Vic Koenning, despite the following glowing remarks about his Clemson coaching career:

In just three short years, Vic Koenning has accomplished something no other Clemson defensive coordinator has accomplished in Tiger football history. Each of his first three defenses has finished in the top 25 in scoring, rushing, total, and pass efficiency defense each season. A top-25 final ranking in all four categories in the same year had been accomplished just twice prior to his arrival.

So Clemson comes into the Gator Bowl with a re-arranged coaching staff, a new defensive coordinator but with momentum.

The last time Nebraska played Clemson was the 1982 Orange Bowl. Clemson came into the game ranked #1, while four-point favorite Nebraska came in at number four. The Cornhuskers lost the game 22-15, with plenty of Husker fans wondering about the officiating. Clemson went on to win the national title. It's been a while, but it's time for some payback. 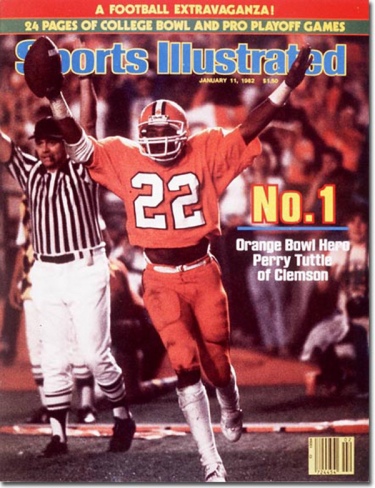