I know, King of the Horrible Pun. That said, Nebraska’s newest commit, 6’4" 248 pound Jason Ankrah is deserving of far more praise. In the end it came down to Nebraska and the Maryland Terrapins. In the end the Cornhuskers have themselves another young gun defensive end to add to their collection alongside Cameron Meredith and Josh Williams of last year’s class.

I bring up Meredith and Williams specifically because Ankrah reminds me of the bookends that Nebraska signed last year. Quite honestly, I see traits of both in Jason. He’s got the "motor", he never quits on a play even if he whiffs and whistle to whistle, he’s hunting the ballcarrier down. Jason’s already got both the bulrush and the swim move down which he’ll need to perfect to an even better level since he’ll be stepping up to some of the best tackles and guards in the country within the Big XII conference. 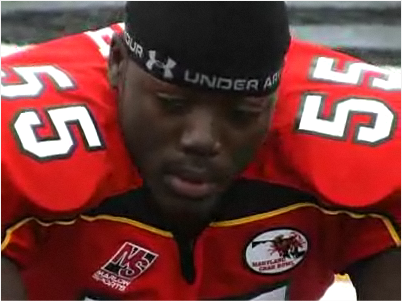 Ankrah’s ability to keep up with a quarterback on a rollout is impressive whether coming from the side for a hit/sack or even getting his hands up for a possible pick. If a QB takes off, they need to have some speed, because outrunning Jason is going to be a feat once he introduces his body to Division 1-A strength and conditioning. Ankrah’s a special talent and gives Nebraska fans even more reason to be excited about having amassed quite a bit of raw talent at the end spots. In a year or two, I think that with Ankrah, Williams and Meredith Nebraska has secured a solid corps of defensive ends for the next several years.