This week I've teamed up with the Kansas blog - Kansas Football - It's Business Time - for our blogger Q&A session.

Husker Mike and I responded to a series of questions from them earlier this week. You will also find their Rock Chalk Roundtable interesting, as well as this analysis from Rock Chalk Talk.

I have to pat myself on the back for not making a single Mark Mangino fat joke thus far, but that (kind of) ends here. You're welcome to leave your favorite Mangino joke in the comments section. (Anything to ease the pain you're going to find within.)

Before we start the interrogation, how 'bout you guys give us some background on your association with Kansas University?

Hiphopopotamus: The long and short of it is that I've been a Kansan for life.  I was born in Kansas and have followed the teams with an unhealthy passion for as long as I can remember.  And as into it as I've always been, it hit a new level once I started school there and has yet to drop off since, even after a hiatus living in Chicago for a while.  If anything, the time away actually took my emotion to a new level as I was only able to make it to five football games and a few basketball games during the greatest sports year in the school's history.  Fortunately, a few of those games were the Orange Bowl and Final Four.

GingerBalls: I grew up with a bit of a KU silver spoon in my mouth, being related to a former coach with a building named after him. KU traditions and the love of all things crimson and blue were impressed upon me at an early age. Sat through many bad years of Kansas Football, but we never left early.  2008, with the Orange Bowl and National Championship, was the best year of my life.

Is Kansas truly committed to building a football program that will compete for Big 12 championships, or is there a feeling this would overshadow the basketball program?

HH: I would like to think they're committed.  And considering the $31M they just spent on complex upgrades and the huge salary raise Mangino was given, they look to be doing just that.  I am definitely not worried about them overshadowing the basketball program any time soon (or ever at all), but so far they haven't even won the north, let alone the Big XII so I can't guarantee they''ll be able to sustain and build on this success. On the other hand, we know the basketball program isn't going anywhere.

GB: It is not too much of a secret that some people around Lawrence, though not that many, are still basketball only fans.  It was definitely en vogue to cheer for Kansas Football around here last year.  Considering the money that we dropped to keep Mangino around and on our new football complex it is quite reasonable that our athletic department is fully committed to being a Big 12 contender. As much money as some schools make in the Big 12, you need to at least be decent in the two major sports to be relevant.  On the other hand, unless something goes drastically wrong for the bball program, the best the football team can do is be on par with it.  This is KU and quite frankly, nothing overshadows basketball.

After last year's season has this year been much of a letdown or have things gone as you expected?

HH: Full disclosure: I predicted a 10-2 regular season with a loss in the Big XII championship game.  But even at the time I knew that was overly optimistic.  So, despite the record this has pretty much been what I expected - aside from the Tech game - and is definitely not a letdown of any sort. Remember, your talking to a fan of a team that has NEVER gone to back-to-back bowl games.  I felt like I was the only one worried more about our defense than our offense prior to the season, but even I didn't expect them to have the trouble they're having. Why I didn't listen to my own preachings when I predicted a record I'll never know, but I still think there's a decent chance this team can finish 2-1 and represent the north in Arrowhead.

GB:Many around here, myself included, probably let expectations run a little too high after last year.  Perhaps we hit the big time a bit too quickly as a result of the perfect storm of last year.  But outside of the Texas Tech manhandling, I wouldn't say anything has gone too out of the ordinary.

This week's game will be televised via pay per view. This will be the fourth Nebraska game on PPV, and it's getting expensive. Will you be buying the game this week or saving your money for basketball season?

HH: I'll be heading up to Lincoln to soak it up in the flesh.  But if that weren't the case, I assure you I'd be purchasing the game.

GB: Will be in Lincoln hoping to see a new team in the win column for the first time in 40 years.

The Jayhawks have yet to beat a team with a winning record, the closest being La-Tech at 4-4. Other than a tougher schedule, what's the biggest difference about this year's team from last?

HH: I think it's a combination of leadership and talent.  Offensively, we lost 3 NFL draft picks (Fine, Collins and Henry) and 2 others who had started for years (McAnderson & Rodriguez).  At Kansas, you don't just replace that with RS Freshman and not expect a dropoff of some kind.  Defensively, we lost an 3 year starter and all-league DT in McClinton and arguably the best defensive back in the nation in Talib.  Again, you can't underestimate the effect the loss of that talent does to a team the relies on finding diamonds in the rough and turning them into playmakers. And along with all that talent, there was a lot of leadership that came from those guys.  I'm not saying this team doesn't have that, but it's a pretty easy argument to make that the leadership isn't entirely what it was a year ago.

GB: Defensive playmakers. All-Americans don't suit up for the 'Hawks too often, when you lose a shut-down corner like Talib it really hurts more than you realize.  McClinton was such a big time motor for our d-line, perhaps the biggest hit we took considering we can't generate much of a pass rush.

You lose one - Kerry Meier or Jake Sharp. Which one stays on the field and why?

HH: Damn hard question.  My instinct is to say I'd keep Kerry, because I can't even explain the enormous value he provides as a receiver to keep the chains moving.  Lest we forget, he's still taking most of his practice reps as the backup QB as well, making him even more valuable.  But on the other hand, you can't underestimate what Jake has done for this offense over the last month or so. Forced to pick, I'll keep Kerry because I have more faith that Crawford or Quigley could do what Jake is doing than I do of thinking anyone could fill Kerry's shoes.

GB: Kerry Meier in a heartbeat.  I like Jake, but Kerry Meier does so much as a wideout while still not taking reps in practice with the receivers. Todd's go to guy and never drops a pass, really never. http://www.youtube.com/watch?v=uemzqLwbnv8

What about Nebraska's team concerns you the most?

HH: Their ability to control the clock.  I'm unsure what to think of Nebraska as I've only watched four of their games - all four of which, they've lost.  But when you can hold the ball for 40 minutes and keep putting points on the board, you're tough to beat.  This is especially true against KU as they are incredibly susceptible to short passes. In all honesty, I don't think I've seen a corner make a break on a ball the entire year.

GB: Ganz's ability to make plays.  He and Reesing are fairly similar in their abilities to make plays and I would be scared as hell playing Reesing.  Only downside for Ganz is his penchant for making boneheaded passes.

Where do you feel you have the biggest advantage?

HH: In our ability to put up points a variety of ways.  With your lack of a pass rush, I think Todd will be able to hit his receivers all day.  And though it's only had one huge game, I really think our running game is just as good as our passing.  Weird as it sounds (especially after the OOC games), this line is better blocking for the run than the pass.  Long story short, I'll be shocked if we score less than 30.  Unfortunately, I'm not positive we can hold you guys under that mark.

GB: Our offense against your injured/non-existent LB-core, and piss-poor safeties. Same thing could be said for your biggest advantage against us though. Should be a shootout.

HH: I've always thought the "Our coach beat anorexia" shirt was the funniest.  I'm having trouble coming up with a worst off the top of my head (what can I say, fat jokes are funny), but I think it's pretty safe to say that it was uttered by a Missouri fan.

GB: Not really a joke, but the ever present rumor that he is physically unable to actually wipe his own ass. I have heard all sorts of stories about him having a manager do it for him or how he had a shower put in his office because he has to shower after every shit since he can't wipe himself.  As to the validity of said story, no comment. 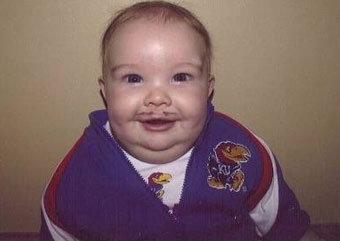 (Corn Blight: Arrrrrrrggggggghhhhh! I had to ask, didn't I? TMI! TMI! Maybe this will help you get through it.)

HH: I'm been wavering all week and I definitely think you guys are in the ball park.  I'll say: Kansas 34 Nebraska 28

GB: It may not happen again for awhile, but the Jayhawks get it done in Lincoln....38-21