It’s 4th and 25 and you’re thinking "we’re going to lose to those SOB’s from Colorado again", right? Then a skinny kid makes the longest field goal in school history and a second later you’re on top of the world and the Huskers are on top of Colorado.

- Alex Henery made the game. He saved his quarterback, Joe Ganz, who put the Huskers in horrible shape by taking a sack to make it 4th and 25. He saved his coach, Bo Pelini, who made one of the worst calls I can remember with a fake field goal that had already been run earlier in the season. You know what happened - the ball is picked off in mid-air and what should have been a 10 point lead ties the game.

- Ndamukong Suh. Is this guy wonderful to watch or what? What an exclamation point - him smashing Cody Hawkins into the ground on his way into the end zone. It was clear he was not to be stopped.

- Time of possession. People can say all they want about it being an overrated statistic, but it has accomplished what’s been needed from this team this year - kept the defense from being exposed more than needed.

- A game we probably should have lost but found a way to win. 8-4 is wonderful and beating Colorado in the manner we did, snatching victory from the edge of an abyss, has to be incredibly disappointing for the which makes it all the more sweeter. 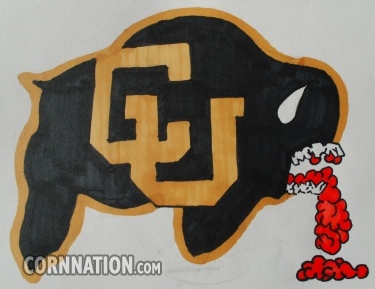