OK, this isn't the same old Baylor that the rest of the Big XII loves to kick around the football field. They've got a legitimate dual-threat quarterback that could be scary-good when his college career ends. Thank goodness we face him when he's a freshman or sophomore, rather than later on. With that in mind...

Offensive Line: B- I went back and forth on this one; they weren't bad, but weren't great either. They improved as the game went on, and even created some holes for Marlon Lucky.

Running Backs: B+ Marlon Lucky had a solid game. Disclaimer: I took my nephew to the game, and he had to make a pitstop with 9 minutes left in the game. As we headed down the ramp, we heard one heck of a roar, and didn't find out until we returned just after the safety about his screen pass. So I'm grading this on the online replay. Quentin Castille had yet another costly fumble that ended up costing Nebraska 5 points (since the defense bailed him out with a safety immediately afterwards). Roy Helu has seemed to disappear from the rushing game...only TWO carries yesterday? He was in for plenty of passing plays, so it's not like he was benched.

Quarterback: B- It's tough to downgrade a guy who completes 70% of his passes for 336 yards...but what you might not have seen on TV was the number of wide open receivers running wide open deep. Instead, Joe Ganz threw shorter screens for minimal game. Go downtown a couple of times, and suddenly yesterday's game isn't nearly as close as it was.

Wide Receiver: A Nate Swift gets an A+ by himself. He's having a monster senior season making clutch catch after clutch catch. Menolik Holt's injury is going to give Niles Paul a lot more playing time, though after that, depth is going to be an issue. Curenski Gilleylen was channeling his inner Abdul Muhammad with two passes bouncing off his hands of stone incomplete.

Defensive Line: A Another solid game from the defensive line. Ndamakong Suh blocked an extra point, and I could have sworn that someone up front (Zach Potter?) got that field goal in the 3rd, though the official stats just showed it as a miss. The way that kick wobbled into the upright, someone had to get a finger on it.

Linebackers: B- Cody Glenn was active...sometimes good, but twice getting flagged for personal fouls. We can argue all we want whether they were legitimate or not, but the fact is he got called for them. Phillip Dillard's injury is a huge loss; word is that his ankle's not broken, but he's doubtful for the Oklahoma game. Small town walk-on Colton Koehler made his prime-time debut in relief of Dillard with a bang.

Secondary: C+ Larry Asante is bringing the wood in in run support, but breakdowns in the secondary led to some huge runs in the first half. Not to mention some deep passes to wide open receivers.

Coaching: B- Good adjustments and fine tuning in the second half. The deep ball was available much of the afternoon, if we had chosen to take it. With Roy Helu in the game, NU has become one dimensional for some reason. KOZN-AM radio's Damon Benning commented on Friday that Helu seems to be in the coaches doghouse, perhaps for not practicing hard. I'm struggling to find any other reason why Helu isn't getting the ball more. It isn't what's happening in the games, as I still think he's been Nebraska's best I-back this season, though Marlon Lucky has been playing well as of late.

OSU: B+ Whether you are from Columbus or Stillwater, there's no shame in taking it to a great team for sixty minutes. You've answered your critics.

Colorado: F No offense, no defense. How's that contract extension for Dan Hawkins working out for you?

Oklahoma defense: F I just checked the Big XII's defensive statistics. Nebraska is 5th in the Big XII at 66th. Texas leads at 43rd. Oklahoma is 54th, but falling quickly. With the poor state of defense in the Big XII, my vote for defensive player of the year in this conference has to be Sooner linebacker Ryan Reynolds. Just look at what his season ending injury did to the Sooner defense.

Kansas: F The Jayhawks, coming off their 2007 Cinderella season, turned back into a pumpkin, and the Red Raiders carved them up, just in time for Halloween. As for what to do with the remnants of his team, I'm sure he's got an idea or two... 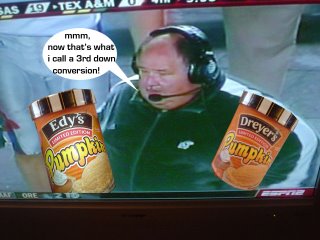 Nebraska Students: D- What was your excuse this week for not even showing up to the game? It was a beautiful day, and you had the rest of the day to go out drinking. The Journal-Star reports it was 100 or maybe 200 empty seats. I went over there just before halftime, and I assure you...it was MUCH more than that. Maybe as many as 1000. The top ten rows of the student sections were virtually deserted in the upper sections, as well as under the overhang in the east stadium.