So here’s what happened. Friday eve, a buddy calls, says he has a ticket, and it can be mine. Long story short, I drive to Des Moines and end up at the same hotel as the football team. This morning, I’m up and walking around, sure ‘nuff, there’s all of them.

I walk past Barney Cotton on my way to get coffee (good thing the SOB got out of the way, too) and Carl Pelini gets off the elevator at the same time I’m getting on, and at that moment I realize I can say nothing to these guys.

They’re working, for crying out loud. And I’m not going to disturb them. And I realize that if I say a word and we lose, it’ll be my fault because I probably have bad karma from all the bad things I’ve done that I’ve never been caught for. 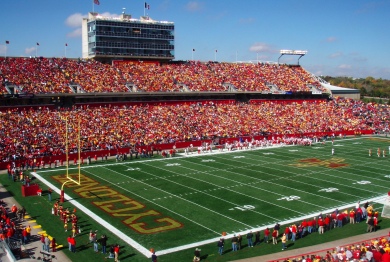 Great entertainment was provided by two guys behind me, who proved that, yes - with an 11:30 am start you can still get up and get plenty plastered by game time. One slept through the first quarter and well into the second. He was apparently awakened by his buddy late in the second quarter, and he wasn’t happy about it.

Still the first guy continued with hilarity, including cheering for the wrong team about half the time. His best comment of the day was late in the fourth quarter: